Before I die I want to...
Learn To Belly Dance. 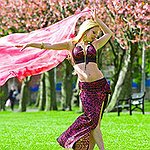 69 buckaroos have listed 'Learn To Belly Dance.' as one of their life goals:

I love to dance, but not in public. I love to watch people dance together and have always wished I could but I feel insecure about it.

Learn to belly dance after I lose weight

It is something of a misnomer as every part of the body is involved in the dance; the most featured body part usually is the hips. Belly dance takes many different forms depending on country and region, both in costume and dance style, and new styles have evolved in the West as its popularity has spread globally.Belly dance was popularized in the West during the Romantic movement of the 18th and 19th centuries, when Orientalist artists depicted romanticized images of harem life in the Ottoman Empire. Around this time, dancers from Middle Eastern countries began to perform at various World's Fairs, often drawing crowds in numbers that rivaled those for the science and technology exhibits. It was during this period that the term "oriental" or "eastern" dancing is first used.

I enjoy movement and I would like to put it in my abilities to do.

Because I'm one of the rare people who can roll their belly.