Before I die I want to...
I Want To Learn Spanish And Speak It Fluently 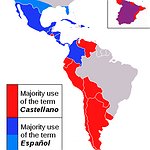 101 buckaroos have listed 'I Want To Learn Spanish And Speak It Fluently ' as one of their life goals:

I hope that I can learn it so I can live in Spain for while, and also teach my children so their bilingual

I want to get an international job so i mist learn many languages. Spanish is a first language that directly apears in my brain.

Travelled to Guatemala and met many other travellers. Most of them spoke at least one other langauge fluently and I realised the power in being able to communicate to others in their own langauge. Since I also want to travel South America in the future, I want to develop this skill further.

It's alwasy my dream to be able to speak fluently and understand Spanish songs. I will achive it by learning day by day.

I am in love with this language!

I found out that my family is from Spain recently so I really want to learn how to speak Spanish fluently.

Spanish was my first language. After returning to America, I forgot the language, and now only speak English. My brain gets tired of hearing English. I feel stimulated when I speak Spanish. I want not get mad at people who can't speak English. I want to take the initiative to learn Spanish, myself. Stimulation is what I really need.

I am very fascinated with the foreign languages. Spanish is one of them.

I want to converse and think in another language

A love of things Spanish: culture, music, and the language itself

Who doesnt want to sound cool by speaking Espanol ! Its such a beautiful and sexy language !

I've been traveling to a lot of Spanish speaking places. And I look Spanish. It would be nice to not be so confused when someone starts speaking to me.