Before I die I want to...
Break A Guinness World Record 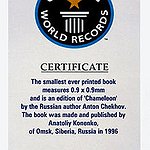 63 buckaroos have listed 'Break A Guinness World Record' as one of their life goals:

I want to bring people along on my adventure to do things everyone dreams of doing.

I really want to be able to say that I have the world record in something. I just think it would really cool.

Hopefully a first then it will stand forever

Really want to break one of these bad boys, preferably a bunch of people dressed in ewok costumes jumping out planes! Now imagine that...

I want to SHATTER a Guinness World Record!

Who doesn't want to break a world record? come on!