Before I die I want to...
Ice Skating 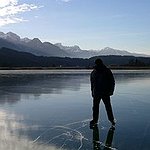 21 buckaroos have listed 'Ice Skating' as one of their life goals:

I have done this. I learned how to skate at age 6, when I was in first grade. I grew up playing ice hockey, even in the summer when I went to hockey camp. My high school girls' teams won four state championships and went on to Nationals three times, I think it was. Then, in college at Harvard University, my Division I NCAA team won The Beanpot and the National Championship. Our record at the end of the season was 33 wins and 1 loss. There were two Canadian Olympic team players on my Harvard team for women's ice hockey and two American Olympic team players. The two members of the American Olympic team won the gold medal in 1998, at the inaugural Olympics for women's ice hockey. The Olympians on my team were Jennifer Botterill (Canadien), Tammy Shewchuk (sp.?; Canadian), Angela Ruggiero, and A.J. Mlezcko.

i want to try ice skating in a real snow

Go ice skating on a pawn if possible.