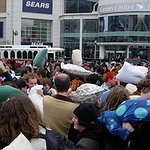 461 buckaroos have listed 'Be Part Of A Flash Mob!' as one of their life goals:

I love watching videos of flash mobs on YouTube and I would love to be involved in one.

I want to be part of a flash-mob...but not just any flash mob; a k-pop flash-mob!

what sparked my dream? I want to say Glee. <3

This has always been something that seems like an unforgettable experience. To do something with so many people on such a grand scale! A must.

Super silly but beautiful. Especially if it's part of a proposal. I'm a sucker for being apart of grand gestures like that.

Flash mobs give (often random) strangers the chance to make new acquaintances and even friends. The idea is very simple: promote a large group of people to do something very random and basically in unison for—according to Wikipedia— “…the purposes of entertainment, satire, and artistic expression” and even, perhaps, putting a smile on the faces of totally unsuspecting bystanders. Prominent examples include the Worldwide Pillowfight Day’s 5,000-person flash mob in New York City in 2008 and the 4,000-person Silent Disco flash mob at the London Victoria station in 2006.

its like being a part of something...belonging to something..its so much fun to see it...must be great to be a part of it

I would like to be apart of a Flash Mob!

Join in with a giant public flash mob.

haha from the movie Friends With Benefits ♥